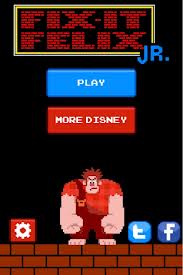 Disney’s companion app to their upcoming animated feature release in November is full of retro kitcsh and old-fashioned arcade fun.

This game is really great for all ages!

– Learning to play this game is easy but actually completing the levels is hard!

I remember a time during my childhood where the only way to play “video games” was to actually put a quarter in a giant machine at the local mall arcade. A companion app to Disney’s November release of their animated film “Wreck-it Ralph”, Fix-it Felix Jr. hearkens back to that Golden Age of 8-bit awesomeness. 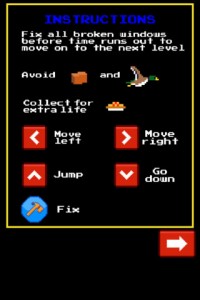 Ralph (the big guy) and Felix (Jr.) are caught in a vicious cycle of deconstruction and reconstruction. Ralph moves up and down the levels of an endless brick building, expressing his frustration by smashing windows and dropping bricks, and it’s up to Felix to follow behind and clean up the mess.  With three “lives” and 60 seconds in each level, the handyman moves from window to window and floor to floor repairing the glass and avoiding virtual concussions.

There are only four directions to move in – up, down, left, and right, clearly indicated by large red squares with corresponding arrows. I tapped the hammer icon when I needed to patch up a windowpane. Both my 2- and 4-year-old learned the game quickly and delighted in the pinging sounds and classic arcade graphics. They ducked bricks a 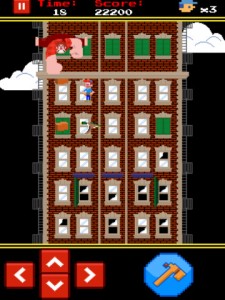 We had downloaded and thoroughly enjoyed playing the game when we caught a preview trailer for the movie. With some admittedly unnatural excitement, I reveled at the speed at which Disney had tackled one of our most-played games. Some requisite Googling revealed that this game had never actually existed beyond the movie which is a clear indication that the animation moguls have some pretty genius marketing pros at the helm. 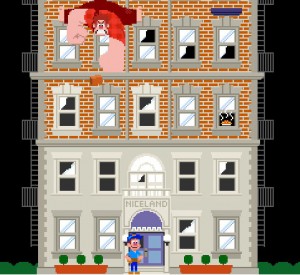 Disney has essentially created a whole new generation of “gamers” with this app while simultaneously appealing to their parents. This app not only utilizes one of the most popular tech tools of their target demographic – the iPad – while referencing the belovednostalgia of the 8-bit arcades that live fondly in the memories of the parents that pay for the movie tickets.  Pretty clever in my personal opinion as a consumer, a parent, and a former arcade junkie.

This app is free and fun, and will appeal to players of all ages.  No quarters required!!