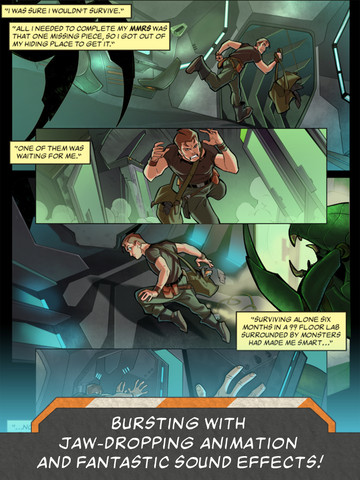 My husband was a big comic book collector growing up.  I personally never broadened my horizons beyond Archie and his buddies, but my better half still has trunks filled with unread, unblemished stacks of comics.  He won’t let the kids touch them, of course, because “one day they might be worth millions”.

Until that day comes, though, there’s Disney’s interactive comic book apps, like Wreck-It Ralph: Hero’s Duty.  Drawing from the popular animated movie, this app is like a back story for one of the film’s central characters Sgt. Calhoun.  The stylized graphics tell of how the Sgt. came to be the cybug-battling renegade with a major chip on her shoulder. 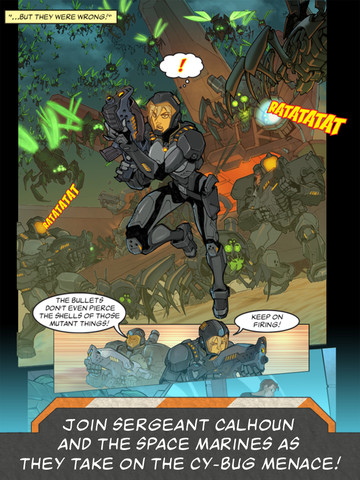 The app plays as though it truly is a comic book with new panels popping up every time the screen is tapped.  Sound effects and moving animation serve as additional interactive bonuses.  Storylines are not narrated so this app is well-suited for the reading crowd, and the general style will really appeal to ‘tweeners.  According to Disney, the story is “the official prequel of the Hero’s Duty storyline from Wreck-It Ralph.” 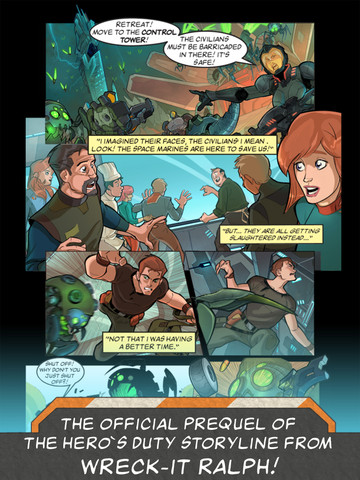 I knew that this app wasn’t really right for my kids, both in the 2-5 age group, so I played it myself to check it out.  II was really impressed with the graphics and fun sound effects.  The back story itself is fun to learn and it sheds a little light on the Wreck-It Ralph movie.  It’s a little more grown-up than Ralph and his shenanigans and I can see that boys in the 8-12 age range would really appreciate the app.

The download price of $1.99 is fair but considering there are no “extras” in Hero’s Duty it may be a little much to spend on a virtual comic book.  However it doesn’t contain questionable language or inappropriate situations so it’s a great alternative to shoot-em-up video games.

– Reads like a comic book to tell the Hero’s Duty back story
– Amazing graphics and animations, and fun sound effects
– Appeals to the Wreck-It Ralph fan on the older end of the spectrum

Hero’s Duty: The official back story for the cybug-blasting Sgt. Calhoun from Disney’s “Wreck-It Ralph”