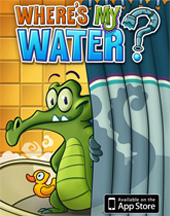 Walt Disney’s “Where’s My Water?” is an expansive physics-based puzzle game with vivid animation and entertaining gameplay. It is definitely worth purchasing.

This is appropriate for all ages, though later levels do become complicated and may outpace a younger crowd.

Where’s My Water? has a simple premise: Swampy the alligator likes his baths, but clean water is hard to come by in the sewer. Your job is to get him that water! Each level is set up like a puzzle, where you have to use your finger to dig tunnels for the water and get it to its destination, unearthing bonus items and trying to collect ducks on the way (hit them with enough water, and they’re yours). It’s a physics-based game, so the action unfolds in real time and your success is based a lot on timing and strategy. The levels increase in difficulty as the game progresses, and each chapter adds new gameplay mechanics to make it even more complicated. The set up is like Angry Birds, where you unlock later levels by performing well in the earlier ones. 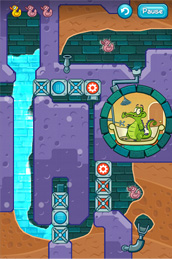 This game will keep you entertained for WEEKS and may cause conflict between you and your kids, as you use any excuse to steal the iPad for “just a few minutes.” There are 4 themed chapters, with 20 levels each in the main game, and there are tons of new chapters (a free one is added every few months).

The gameplay is simple, but the obstacles add a great deal of challenge. There are plants that will grow if they touch any water, blocking your path to the drain. There are moving walls that can be switched on an off by hitting their switches with water, and some just move on their own. There is even acid that will contaminate any water it touches (or burn through those pesky plants). These mechanics are all just in the main game – each additional chapter adds new elements to complicate things.

Thankfully, the complexity of the levels build up slowly, so the ratio of entertaining to frustrating is quite high on the fun side. The name of each level typically gives a major hint as to how the puzzle should be approached. If you get really frustrated, there’s also the option to unlock a level using the “Locksmith Duck” – meaning you pay some real cash. 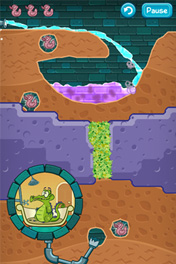 This game has become so popular that Disney is working with YouTube on a 12 episode web series to flesh out the characters, and they’re considering offshooting them into other media as well. This is definitely a game that will be fun for the entire family and is worth a purchase. While there are a lot of paid expansions available, the depth of the main game is expansive enough (140 total levels) that the in-app purchases aren’t annoying.

This game is available in a paid version, or free (ad supported). This app is a keeper!

New Chapters (as of June 2012):
Change is Good: Can now change the fluid state of the water
Boiling Point: Can change water to steam
Stretched Thin: Adds water balloon obstacles
Caution to the Wind: Adds fans and vacuums
Rising Tide: Valves that can redirect water
Out to Dry: Dirt can be turned to mud, causing different properties depending if it’s wet or dry

Additional Apps:
– Where’s My Perry? Help the characters of the popular Disney show Phineas & Ferb by using water in its different states to solve puzzles. Similar gameplay, but different enough. Purchase it here.

2 Responses to Where’s My Water? Review