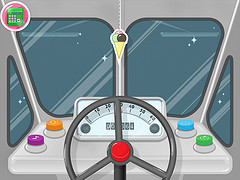 Now your kiddos can enjoy everyone’s favorite frozen confection without dripping all over the place with Ice Cream Truck, a virtual delight!

Honestly the younger players will have more fun playing this because it’s easy and fun; probably not too challenging for a school-aged player.

Ahhh, summer!  School is out, pool parties are raging, and of course, the beautiful tinkling sound of the ice cream truck meandering down the street.  Pretty awesome, right?  Now picture two small children arguing with their frazzled mom in the high noon of a 100+ degree summer afternoon, handing over fistfuls of nickels and dimes from the coin jar because she never keeps any cash on her.  Apparently the developers at Funtastoonic had a nightmarishly similar experience because Ice Cream Truck helps to eliminate all of the anxiety that washes over me when I hear the truck entering the neighborhood. 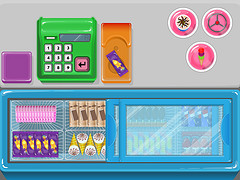 They also must have known that there is a huge market for the freshman-level iPad users, a market that has been cornered (until recently) by juggernaut Toca Boca.  Don’t get me wrong – I am irrationally and irrevocably head-over-heels for the aforementioned collection of apps, but it’s nice to see a fresh face on the scene.  After all, there are only so many pairs of underwear to wash or giant pink coifs to create.

Enter Ice Cream Truck:  Literally an ice cream truck where the players can participate in every part of the 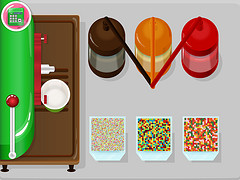 experience.   From driving the truck and operating the controls to handing out Rocket Pops and collecting payment; all the way to creating mouth-watering combinations of flavors and toppings.  All of this is done by either tapping on the screen or dragging items, something that even my two-year-old was able to do and enjoy.  This can also be played as a multi-player game with one player acting as the truck operator and the other as the customer.

There are four different scenarios that I could choose from once I opened the app, one if which was the cash register and prepackaged treat freezer.  Two of the other screens – the frozen yogurt machine and the multicolored ice cream wells – both come back to the first.  Here is where some actual learning sneaks in like a genius little ninja.  As the operator I was able to set the price of an item on the register by hitting the number and a coin purse would appear for me to pull out the correct amount.  Other skills like shape and color recognition pop up frequently, and there is an intro to the game that suggests some questions for parents to ask about ice cream to keep little brain-wheels turning. 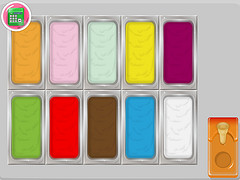 Now for the most important aspect of this app.  For some reason, small children love the idea of actually driving a vehicle and the driver’s seat in the truck doesn’t disappoint.  I was more excited than my toddler to see that I could press buttons for windshield wipers during the rain and cleaning fluid for when the windshield got dirty.  I could also turn the headlights on or off and change the canny melody that plays to draw the neighborhood kids to the truck.  Hands down, though, the best part of this screen was the fact that when I tilted the iPad to one side or the other the steering wheel moved and the view tilted – I actually laughed out loud.

Not only does the app help to alleviate sticky hands and broken waffle cones, but it also manages to teach a few early learning skills to unsuspecting little players.   This app is fun and free, and offers your little ones morsels of educational deliciousness disguised as rainbow sprinkles and chocolate sauce.  Now we just have to find a way to invent real ice cream that actually boosts IQ points every time we ate it.

– Eight types of pre-manufactured ice cream in your fridge, frozen yogurt and scoops to choose from!
– Fun sounds when your customers eat!
– Graphics designed for retina display!
– No third-party advertising or in-app purchases!