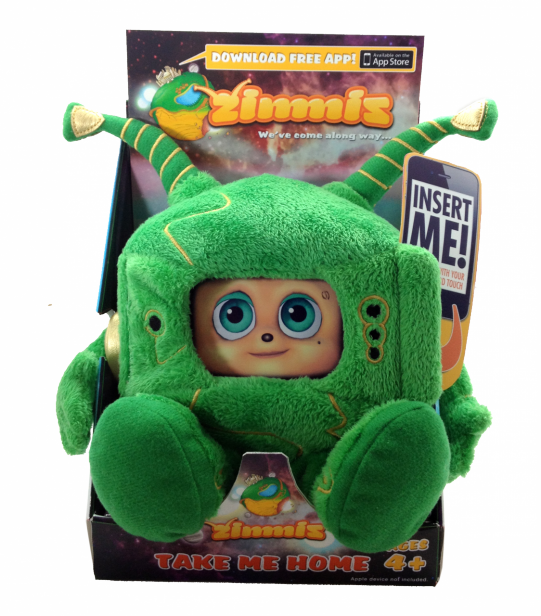 Disclaimer: The Zimmiz toy featured in this review was provided free of charge.

Let’s have some “real talk”:  You spent a lot of money on your iPad and it physically hurts to see the prices of kids’ iPad accessories.  If you decide to purchase these extras you want them to deliver, right?  They have to be able to please the toughest critic in the house – your kids.  That’s why we decided to start sharing our iPad accessory experiences with you here on iPadKids.com.

We covered the news of the release of Zimmiz and wrote about the basic concept of the app-compatible toy, so I was pretty excited when I got my hands on the soft green dude.  The Zimmiz app is accessible on iPad, but the plush is specifically intended for your iPhone 3, 4, or 5, or iPod Touch.   After downloading the free app, the whole package becomes an interactive bundle of weird fun.  On paper it’s a brilliant idea, but seeing it in action was a real disappointment.

The first frustration is that the toy and the app are both Apple-exclusive (which obviously won’t be a problem if you own an iPhone).  When I tried to slide the phone into the “pocket” at the front of the toy I had to remove the case on the phone – which, incidentally, wasn’t bulky or complicated to remove.  Had there been an OtterBox or something similar it may have been a hassle. 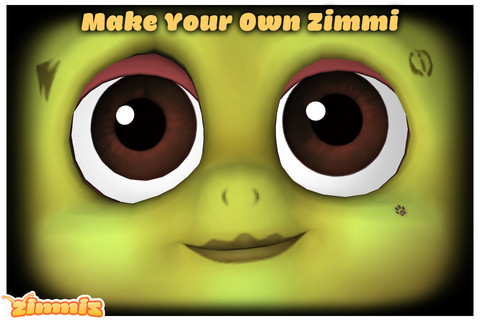 Once I got the phone in and opened the app, I got to customize Zimmi the alien from his eye color to the shape of his nose.  I began talking to it before I realized it didn’t respond to noise.  I tapped his birthmark as instructed and he sneezed boogers all over the screen, which I then wiped off.  Getting up from the couch and carrying Zimmi to my kids in the playroom coaxed all sorts of noise out of the little fella, including a request for a hug.  The kids’ reactions to Zimmi was lukewarm, and within a minute or so they abandoned the app opting to play with actual “real” toys. 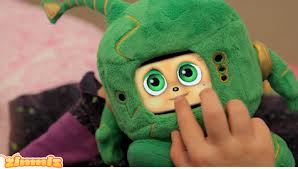 Obviously Zimmi won’t accommodate an iPad, which is what the kids use to play apps.  For such an under performer, the toy itself is kind of expensive at almost $25, and exclusively available on the creator’s website or at Build-A-Bear retail outlets.  I was successful in downloading the app on the iPad and it was just as interactive without the plush toy housing, and I wondered about the necessity of the toy itself.

If you’re in the market for an interactive talking app there are many on the market that really deliver the fun.  Both the Zimmiz toy and app are mediocre at best and fell short of my expectations.  Only two redeeming qualities stand out for me: The softness of the toy and the awesome idea of combining a “real” toy with the iPad to encourage playtime interactivity.  Hopefully the folks at Big Foot Toys realize that with a few tweaks Zimmiz could really be “out of this world” and I look forward to their next offering.

Update: Big Foot Toys tell us that some updates are on their way for the app, which should make Zimmiz that much more enjoyable. We’ll be sure to update you once they’re live!

– Any bulky cases on the phone or iPad need to be removed before using the toy
– App is free to download but the accessory is pretty pricey
– Character within the app doesn’t respond when spoken too, which would be a nice feature

Cool concept but some fatal flaws make this accessory a dud.