There’s something to be said for having two school-aged children who like to use the iPad.   They are (usually) pretty autonomous when it comes to figuring out new apps, and with my oldest now reading, no one really asks me for help anymore when it comes to games and apps.  What all this means is that I can hand over the iPad to them in a pinch if I need a few uninterrupted minutes on the phone or checking out at a store.

The same could not be said for when they were toddlers.  Of course, that was during the very early days of the edu-tech movement that we’re smack in the middle of now – throw a stone in the App Store and you’ll likely hit a game that’s touted as ‘perfect for toddlers!!’ or ‘guaranteed fun for your preschooler!!’  However, between 2 and 5 is actually the perfect age for you to start being selective about your kids’ media diet.

In my honest, uneducated, unscientific opinion it’s useless to let your toddler or preschooler play on your iPad or iPhone unless they’re truly getting some kind of enrichment out of the experience.  Sure, there are plenty of benefits to letting very young children play with mobile devices, but those results are only amplified when there is some substance to the content being accessed. 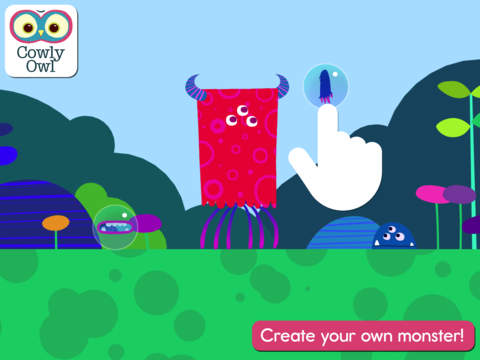 Which brings me to Monster Mingle.  Makers Cowly Owl have produced some pretty spot-on toddler- and preschooler-friendly apps (check out Dinosaur Mix and Little Digits) so I had high hopes.  Spoiler alert: I wasn’t disappointed.  Monster Mingle delivers, and it almost makes me want to have a toddler in the house again.  ALMOST.

Featuring bright colors and crazy characters, the game is an open-ended journey through land, sea, and air.  Little fingers guide their monsters through the ocean, catapult it onto dry land, and help it glide through the air.  Along the way players can simply tap on bubbles to customize their monster – adding tentacles for the sea or maybe a crazy big green nose just for fun.

In this style of open-ended game play, young players aren’t just ‘wasting time playing’.  They’re actually building imagination skills, working on problem solving (does a monster need wings in the ocean?), and building dexterity and hand-eye coordination.  These are all things that are included in several established preschool curricula across the country, and they are the foundation to build on when kids enter a formal school environment.

There aren’t any rules in Monster Mingle, and there aren’t any point systems or written game play instructions.  It’s $2.99 in the App Store and this price is more than fair; the app doesn’t support in-app purchases or third-party advertisers, and there are zero social media options (like sharing pictures on Twitter).  All of these are essential ingredients in making a quality app geared specifically for the youngest demographic of iPad users.