I remember when my son was born and marveling over how long his tiny fingernails were.  Before we left the nurse told me to make sure to trim them so he didn’t cut himself, but I  balked at the idea of trying to cut them myself.  I actually went so far as to call the pediatrician’s office to try and schedule a baby manicure – which, of course, the nurse told me was entirely unnecessary.  So after much fretting I decided to try it myself, and while I didn’t cut anything other than nails the process took nearly an hour.

Fast forward to his toddler days: now I had a wiggly, impatient ball of energy who couldn’t sit still longer than 3 seconds at a time.  I managed not only to cut a few fingers, and to this day he swears he bites his nails to avoid having them clipped.  (Frankly, I don’t blame him – I get a little squeamish at the nail salon when the practiced manicurists take out their sharp instruments.)  Now the process took an hour again, and included cajoling, bribing, and a high-speed chase around the house with me waving the nail clipper like a maniac.

Obviously I’m not the only mom to run into the fiasco that is known as toddler nail-clipping.  I tried in vain to explain to both kids that it’s important to keep their nails short for many reasons: long nails can scratch, dirt and germs can get caught underneath, it looks neater and more tidy.  I’m sure all they heard was “LET ME CUT YOU MWAHAHA” (that’s an evil laugh, for reference).  My kids are now 4  and 6 and have – for the most  part – overcome the fear of nail clipping.

For those kiddos who haven’t though, it can be a hard concept to comprehend.  Inevitably there’s going to be a slip of the clipper or one wrong move and both you and your kiddo will end up crying together.  Nevertheless nail clipping is really a crucial hygiene habit to teach early on – and that’s why I wish the new Duckie Deck app Hungry Clipper was released sooner.  It probably would have saved us all from some serious frustration.

Hungry Clipper includes  intuitive, reading-free game play.  Kiddos just guide hands up to a pair of adorable clippers, watching as the nails are trimmed and the hands express their gratitude with funny non-verbal noises.  The hands change each round, and some include additional hygiene help like taking off rings or nail polish removal.  There are even animal paws! 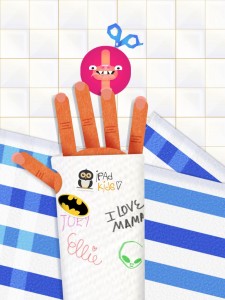 Although the app doesn’t provide advice on how to clip a toddler’s nails with as little screaming as possible (although that too would be a great app) it does provide the tools for parents to start an off-screen narrative with clipper-shy kiddos.  My kids and I had some interesting discussions about nail-clipping, like the fact that everyone (even people with tattoos and even kittens) have to cut their nails, and that helped tie in the overall healthiness of keeping nails trimmed and clean.

Hungry Clipper is just another of a long line of clever and creative apps from one of our favorite developers Duckie Deck that help promote the learning of tough-to-explain hygiene habits that toddlers need to learn early.  At a download price of $1.29, it’s a lot cheaper than the therapy my kids are going to need after the years of trauma I’ve inflicted with nail clippers MWAHAHA (that’s another evil laugh).