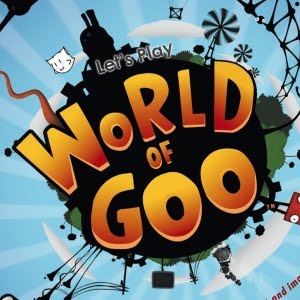 What do you get when oozing balls of black stuff and fun physics puzzles collide in an explosion of stunning graphics and clever story lines? World Of Goo, of course!

Price: $4.99
Age: 8+
iTunes rates this app as a 4+ game but players need to be able to read independently to progress through the levels with minimal frustration. 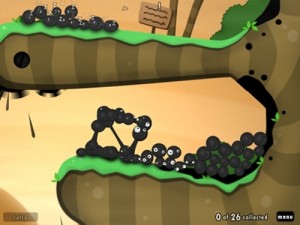 Having two kids under the age of 5 I see my fair share of goo. I won’t go into too much detail but I will share that grape jelly is pretty versatile, and that’s just scratching the surface. Needless to  say I never considered that playing with goo would be fun or require no cleanup, but World Of Goo HD has proven me wrong.

I wasn’t sure what to think when I saw the mysterious eyeball icon and vague description of the game from the iTunes Preview. However the game itself was released in 2008 with several upgrades since and has remained a wildly popular download, especially with the release of the HD version for the newest iPad owners to enjoy. While I assumed the game would be better suited for the preschool demographic (it is goo after all) I was pleasantly surprised that it gave me a reason to hoard the iPad and send the kiddos to watch “Despicable Me” for the 7th time in a row.

The app opened with a strange planet shape in shadow and bouncing goo balls touting giant eyeballs – enter app icon. A red arrow signaled me to tap on the beginning point, the first level of the game which explained the game play method.  Basically I had to construct a geometric tower with corner points of goo balls to reach a pipe, where the balls were sucked in to meet a number goal balls collected. 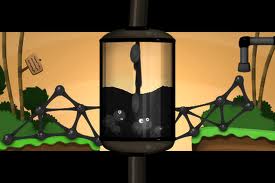 Signs within each level displayed messages with hints on how to build the structure required in each level, and new forms of goo were discovered along the way. Balloon goo helped with aerodynamics, green goo balls were perfect fore shape-shifting and friction, and so on. There’s also the mysterious presence of the World Of Goo Corporation who is responsible for a variety of goo-related lines of facial care products and soft drinks.  Not to be cloak-and-dagger about it,  but I can’t tell you too much about Goo Corp. without totally blowing the unique and funny storyline. 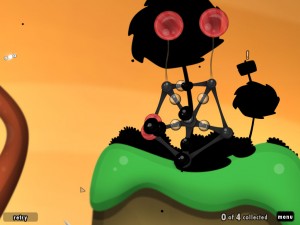 There are a few minor details that keep this stellar app from being a full 5 stars. First, there haven’t been any new levels added since the initial release of the game 4+ years ago and no new upgrades in well over a year.  Secondly, while the game showed up in a chart displaying the top apps for kids, the targeted age group should really be more defined than “kids” or the generic “4+” rating on iTunes, as my 4-year-old couldn’t comprehend this game play one iota.

Other than a few minor flaws, World Of Goo HD is compelling, creative, challenging; I could continue with the alliteration but I will spare you.  While there is some initial sticker shock at the $4.99 download price it’s worth mentioning that the other PC-based and game console versions of this game cost between $10 and $20.  Fiscally speaking it’s a bargain, but what’s priceless is becoming absorbed in this wonderful game and ignoring a movie you know by heart after 2 solid days of repeat.