Using The iPad Timer – Let the iPad Be The Bad Guy 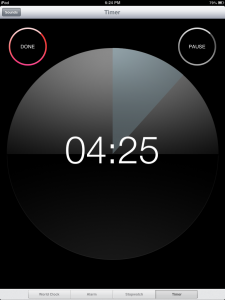 As a stay-at-home mom, I wear many hats: Cook, housekeeper, nanny, teacher, handyman, pet sitter, and toxic waste handler, just to name a few. Ask my 5-year-old and 2-year-old what my main job is, and they’ll tell you my sole purpose in life is to get them in trouble. In their eyes, there is nothing I love more than to put them in time out. I am The Bad Guy.

Dad, on the other hand, is The Good Guy. He’s the best toy ever invented. During the couple hours my children see their father before bedtime, they want nothing more than to play with him nonstop. As far as they are concerned, this is Dad’s purpose, his reason for being. If ever Dad happens to put on The Bad Guy hat, mass confusion ensues. Whatever has gotten into Dear Father, my girls seem to ask whilst passing wide-eyed glances at each other. However, once The Bad Guy hat comes off, all is forgotten and Dad returns to his lofty pedestal.

Being the disciplinarian is tough. I’m the one who gets the brunt of the tantrums, the yelling and screaming, the throwing of toys in anger, the glares, the heart-stabbing “I hate you” and “I wish you were gone and Daddy were here instead.” It’s tiring. It wears you down.

Playing with the iPad is a daily routine with my 2-year-old. Whenever I’m busy with her big sister, my youngest will curl up with the iPad and keep herself busy. While I’m grateful she can occupy herself without my assistance, I dread when the time comes that I have to take the iPad away. She’s too young to understand that we have other things to do, places to go, errands to run. As far as she’s concerned, playing is the only thing on her to-do list and she is not done.

Like good ol’ Dad, the iPad can do no wrong; it is simply a fun toy, a friend who never scolds or reprimands but instead only wants to play. So this weary mom got an idea: Let the iPad be the one to tell her it’s time to stop playing. How? Easy! I simply set the timer on the iPad and told the toddler that the iPad would let her know when it needed a break. Would you believe that when the timer went off, my 2-year-old set the iPad down and came to tell me she was done? No tears. No tantrum. Just acceptance.

There’s a part of me that wishes I could share the lofty pedestals with my husband and the iPad and throw my bad guy hat away forever…but then I look in the mirror and realize that the hat compliments my Sneaky-Mom-of-the-Year medal quite nicely. What girl turns down matching accessories?