In Sprinkle Junior, your little one can use fun physics to help put out fires on a far-away planet after an unfortunate meteor shower.

The actual tagline for this game is “A wet playground for all ages!”

– Kind of major: This game is super short once your kiddo masters the play technique

If you’ve heard the old story once, you’ve heard it a million times.  Seems like every day there’s news of a meteor shower raining fiery balls of space rock onto a neighboring planet, inhabited by brightly-drawn, robust alien beings.  What?  You haven’t seen the Enquirer yet this week?  Oh, well, I don’t want to give out any spoilers. 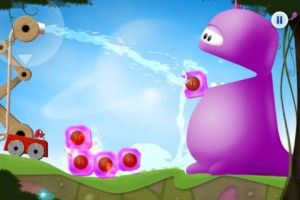 So maybe extraterrestial news like that doesn’t quite make it to your local news channel, but it’s fun to think about – especially for the younger crowd with notoriously active imaginations.  Sprinkle Junior takes this concept and places it into a fun and engaging app that plays little brother to its more challenging counterpart app, Sprinkle, from the same developers at GamerPop.  A short video available at the start menu lays the groundwork – aliens, meteors, etc. – so players get the gist. 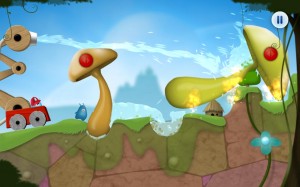 Looking at screenshots of this game I knew instantly that my 4-year-old would be drawn to this app.  Characters are like cartoons; round and bright and funny-looking, and Sprinkle Junior himself is wearing a baseball cap.  The 30 levels in the game are represented in the start screen by five fun icons and I could start at the first in line sequentially or skip around.  This feature is pretty crucial for keeping the toddler/preschool crowd engaged as they generally have the attention span of a cricket. 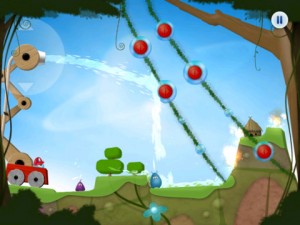 In this ease, however, is this game’s most fatal flaw.  My play time to complete all the levels was super-speedy so I returned to the beginning and timed myself the second time around – I spent just a little longer than seven minutes playing through all 30 levels.  Because there was no 3-star scoring system or timing, it’s not like I could earn more non-existent points for besting my personal record.  For a download price of $1.99 I expect to get a little more substance out of an app; I don’t see my son playing this a second time after mastering it once.

While Sprinkle Junior is fun and visually appealing, at that price it can’t compete with some really brilliant free kids’ apps available.  With the $2 you save by skipping this download you can run out and grab the latest issue of the supermarket tabloid to catch up on UFO news.