Born in February 2011, My Job Chart was crowd-funded into existence as a way for families to organize, motivate and reward their children for completing certain tasks or chores around the house. With two sometimes lazy children myself, the My Job Chart website is a dream come true!  Now, released on the 25th of this month, the virtual chore chart has a mobile app to complement its site.

The My Job Chart program has risen to fame and popularity because of its unique reward system. Children are rewarded with points for each job they complete and the points translate to a dollar value that allows children to make purchases from an online reward store (supported by Amazon) or to even donate their point’s monetary value to charity.

Now, prompted by hundreds of thousands of fans, the My Job Chart developers have finally released a mobile app to complement the incredibly popular site.  The CEO and founder of My Job Chart, Gregg Murset, is a father of six and had this to say about the new mobile app:

Going mobile for My Job Chart makes perfect sense because users can access chore charts on the fly instead of having to wait until they get back to their computer. Let’s face it, most family activities happen when we are away from our desks. We really think our members will enjoy the ease and convenience of the new app. 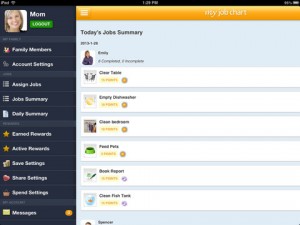 For parents who do not like the idea of financial incentives or have children who are too young to understand money and spending, there is the option to create custom ‘free’ rewards such as a day at the park, or a family movie night.

The ‘My Job Chart’ app is available for download via the Apple iTunes Button below. Use of this app requires an account on the My Job Chart website.