If you’re a parent, you’ve probably uttered that phrase a million and three times – I know I have, especially when it comes to trying new foods.  My oldest is special needs and is extremely particular about which foods he puts in his mouth.  If it smells weird and looks funny, there’s no way he’s trying it.

It’s also a simplified method of getting our kids to engage in activities that we have the foresight to know they’ll enjoy.  For whatever potential reason – and there are a lot – there might be some hesitance on our kids’ parts to join in, an we try out best as parents to ease their fears by attempting to convince our children that they’re really missing out. Sometimes it works and sometimes (for us, quite often) it doesn’t work, and that’s okay too.

However I cringe a little when I hear this phrase or any variation of it from a children’s television show or a game they’re playing on their iPad.  It’s one thing for a parent or caregiver to encourage kids to try something new because those parents and caregivers are present and can guide a child through the emotions that might arise from encountering something different and unusual.

Children don’t have the emotional maturity to rate the scariness of something and realize there are some truly scary things out there that they really shouldn’t try.  It’s borderline irresponsible for children’s media to tell children to try something scary and be brave; that kind of guidance needs to come from a real-life adult and not a fictional character. 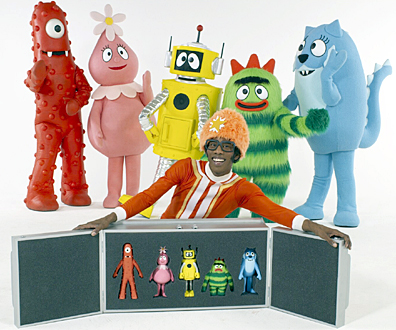 Depending on media to teach children the valuable life lesson of keeping an open mind can also blur the lines between real and make-believe.  My children are more apt to listen to suggestions made by the characters from the television show Yo Gabba Gabba (my daughter often tells me “don’t bite your friends!”) and it can be hard to realize that some things don’t translate well into “real life”.

A darker subtext can also cause this mantra to be the opening line for peers and possibly other adults to take advantage of children.  It can trick kids into thinking that they should try EVERYTHING that’s scary or new without giving thought to the consequences.  In my opinion, it’s the basis for peer pressure; if a child is accustomed to trying everything without discretion they could find themselves in potentially dangerous predicaments.

I applaud children’s media for including this message in their content but the old mainstay of “try it, you might like it” needs to be updated to reflect a changing climate within the industry.  We can change the conversation by using real-life anecdotes and inviting our children to try something new without demanding it of them.