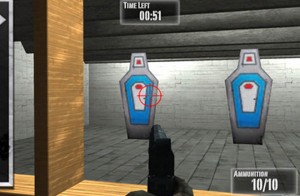 A month after staggering news headlines regarding the tragedy that took place in Connecticut recently, the NRA, in a lapse of good judgement, decided to release their latest app: ‘NRA: Practice Range’.

NRA:Practice Range, originally released for ages 4 and up, is a target shooting app that places the user in a firing range where he or she can choose from a wide array (nine different choices) of handguns and rifles to shoot at stationary, albeit coffin-shaped, targets. Points, of course, are rewarded for accuracy. Since the release, the NRA updated the player age recommendation to 12 and up, however many critics are still in an uproar over the NRA’s lack of tact.

Joel Faxon, a long time gun owner and a member of Newtown’s Police Commission, told CNN in an interview, “It’s outrageous. The NRA never ceases to amaze me.”

It seems that majority of the judgement placed on the NRA’s newest app is not so much concerned with its content, but its obviously poor timing.  This is the first time the NRA has received such widespread criticism for their involvement in a video game, however, this is not the first time the NRA has marketed shooting games. In 2006, they endorsed a shooting game called “NRA Gun Club” for PlayStation 2 and in 2008 they licensed 3 more games to use their acronym: NRA Xtreme Shooting Accuracy, NRA Varmint Hunter, and NRA High Power Competition.  It is obvious that most of the criticism stems from the release date, but many parents insist that this app is not child-friendly.

The NRA would, of course, challenge this criticism. Their app description claims to “instill safe and responsible ownership through fun challenges and realistic simulations”.  The app also ensures that it “strikes the right balance of gaming and safety education, allowing you to enjoy the most authentic experience possible”.

Would you download the NRA:Practice Range App for your 12 or older child? Why or why not? Let us know in the comments below!