A while back, when the new Hasbro Furbys were first released, we wrote about their app compatibility and how incredibly far these toys have come, in comparison to the Furbys of some of our childhoods. Not only has Furby’s looks changed (digital-display eyes instead of mechanical eyes, a new tail that wasn’t present before), his abilities have changed a lot, too! Instead of simply interacting with children, Furby can now interact with your smartphone and iPad, as well. Subsequently, there have been a few additional Furby apps cropping up in the app store as a result of Furby’s incredible popularity.

Now, just months after the new Furby release, children can play with a brand new app called ‘Furby Mouth Off’. If your children 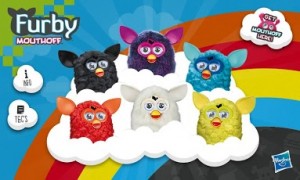 have ever wished they could speak ‘Furbish’, this is the app for them! Children can choose from a series of colorful  ‘mouths’ within the app (I know, the whole thing sounds really creepy) and, once chosen, kids are able to hold the phone up to their own mouth, screen outward, and talk to make the mouth move and talk in Furbish, as well. Yes, like I said, slightly creepy.

Using sound-reactive technology, children will be able to make the interactive Furby mouth say all sorts of things in Furbish. Just imagine your child, running though your house, holding your iPhone up to their mouth while they yell and scream all sorts of craziness into a Furby mouth that converts their sounds it to a make-believe language! While it might not be the most educational app we’ve covered, it certainly does sound like lots of fun for little Furby-lovers.