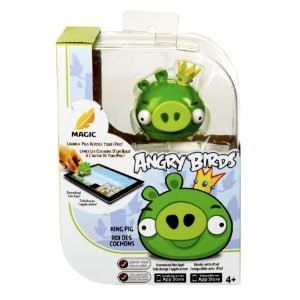 Since its initial, earth-shattering release, Angry Birds has done more evolving than Madonna over the past 3 decades.  There are about 3,479 themed versions of the original game, the story from the pigs’ points of view, and every kind of branded merchandise you can imagine.  It’s only natural now given the overexposure to the phenom that is the Angry Birds franchise that it takes something new and innovative to catch my attention – something like King Pig.

The concept behind this crossover toy from Mattel is theoretically simple:  Make something that could be used for tactile, real play and also something that can be used interactively with a popular and well-known app.  My son passed through the toy aisle and was inexplicably drawn to the goofy green pig in a box shouting, “Look Mom!  Real live Angry Birds!”  I was impressed as I read the box and figured the price point was going to be high so I started thinking of creative ways to explain to a four-year-old about consumerism in America. 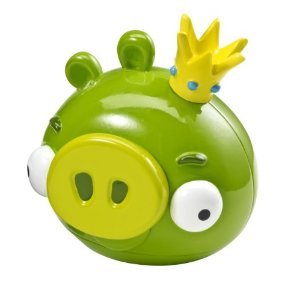 By checkout I had found that the toy was under $10 and figured that was cheap enough to see that this new trend was all about.  The two of us were so curious that we actually both sat in the driver’s seat in the store parking lot and tried to figure out what King Pig was all about.  Imagine our collective surprise when we placed the pig on the iPad in Angry Birds and our whole life was turned upside down.  Okay, that’s a bit of an exaggeration, but everything was reversed – the pigs launched through the air and the eggs were hiding in the structures awaiting their fate.  We also unlocked three other modes only available with the toy, all changing the way we played Angry Birds.

While we did have a lot of fun and it was easy enough for a child to use, the pig is small and plastic.  On one hand it’s great to see the marriage of a simple children’s toy figurine with the technology of the iPad.  On the other hand any toy smaller than a watermelon lasts about 3 days around here before it’s lost, broken, or chewed up (by the dogs, of course).  And without his army of bacon or his feathered archenemies, King Pig doesn’t really adapt well in a Barbie or toy train make-believe scenario. 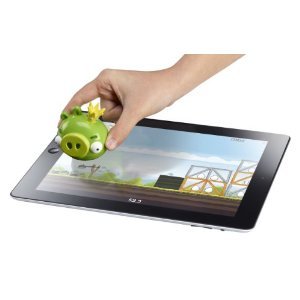 The price of the toy has steadily dropped since we bought it upon its Fall 2012 release, and can now be found online for $8 or less.  Ours was purchased from Target, but I’ve also seen them at WalMart and Toys-R-Us.  Mattel’s King Pig is  inexpensive, easy to use, and requires no additional apps to be downloaded. If you have an Angry Birds fan in your house this is a great little gift to increase the interactivity with the iPad.

– Small size can lend itself to being lost easily
– Unless you have a slew of other Angry Bird character toys, the only functionality for this is with the iPad