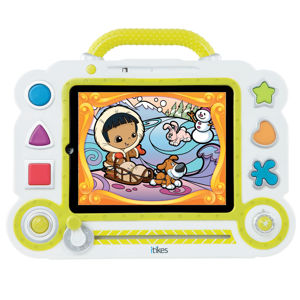 As the holiday season approaches, more and more parents are beginning the crazed scramble for that elusive hot toy. Do you simply get whatever mindless toy is most popular? Do you spring for the hardcore-educational toy and hope your kids will actually play with it?  If you’re like me, you want to invest in toys that will not only entertain and excite your kids, but also provide some sort of educational or creative aspect as well. Making good use of an educational asset that you already own, such as your iPad, is an added bonus, right?  Well, look no further! As I was perusing the toy aisle of my local department store, I ran across this gem. There were only two left on the shelves and I may or may not have run someone over with my cart to get it, but boy was it worth the effort!

The new Little Tikes iTikes Canvas is truly the top dog of iPad compatible toys for many reasons: