LaunchPad Aspires To Engage Children Instead of Pacify Them

Parents who are involved in what their kids play on the iPad know the difference between a quality, educational app and a mindless “babysitter” app game. When we limit our child’s ‘screen time’, parents want to make the most of this time by keeping their children engaged and learning instead of tapping away without even having to think. Worry not, brave parent! Entrepreneur Andy Russell and his company, Launch Pad Toys, feel the same way! 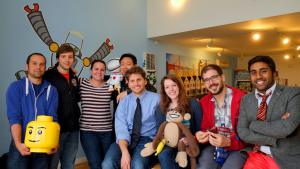 Russell and his Launch Pad Toys team have recently partnered with DreamWorks Animation to create apps that are educationally nurturing, instead of “digital pacifiers”. This partnership has birthed the new ‘Toontastic’ app that features characters from the latest Shrek movie. Toontastic is designed to, not only tell stories to children, but to inspire children to tell their own stories. Designed with the help of Stanford’s graduate school of education (where Russell also graduated), Toontastic has won the approval of teachers and also managed to land in the iTunes hall of fame.

LaunchPad is aspiring to be “the disruptor” in the educational toy market by doing things that no other company has done before. Their partnership with DreamWorks ( who has also partnered with Rovio to create Angry Birds) has put them on the map and has given LaunchPad the fuel that they need to really make waves in the educational tech industry. DreamWorks’ Head of Global Interactive cites that LaunchPad is an example of how DreamWorks Animation is embracing new ways of connecting with their audience by partnering with a small studio that has large ideas.

Although LaunchPad’s Toontastic does bring in revenue via in-app purchasing, their junior app that is directed toward very young children does not contain any in-app purchasing opportunities and costs a flat $2.99 fee to purchase. Toontastic by LaunchPad is available in the Apple iTunes App Store by clicking the button below.