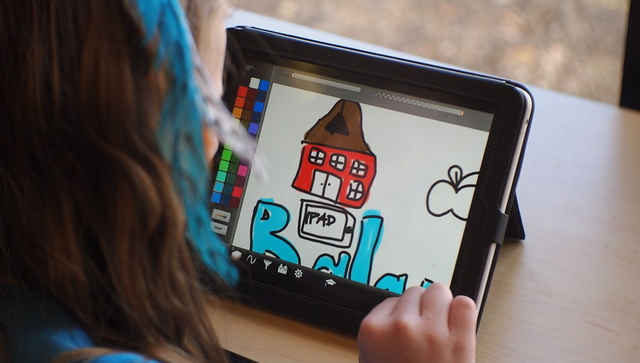 Along with watching movies, keeping up with social networks, and checking email, the multi-purpose iPad is paving the way for the future of autism and communication. Most children who have an ASD (Autistic Spectrum Disorder) are language-delayed or, if they’re on the low-functioning end, non-verbal. Kids become frustrated, unable to process what’s being said to them and how they should respond, which is enough to cause a meltdown. Ask me – I know from experience. The iPad, introduced in 2010, now supports hundreds of apps to assist children with talking, conversing, and communicating through visual images, interactive activities, voice output device apps, and voice recording apps.

Most autistic children are visual learners. Autistic children are learning how to better communicate by using the iPad’s graphics, voice output apps, and touch screen interaction. My own ASD son loves his apps for spelling, learning opposites, learning to read, vocabulary,  math, and games. He enjoys the interaction and the graphics and animation and is motivated to do the work on the iPad versus pen and paper. I enjoy it because I can leave him with it a few minutes while I catch up on my day!

How is it used?

Kelly Day, a Speech Language Pathologist (SLP), uses the iPad for two different reasons – as a tool to promote communication and also as a reward for doing tasks in therapy. She said the “reward” usually involves a language-rich app. “Whatever I’m doing with the iPad, I put myself between the child and the iPad. I want to make sure the child has to communicate with me to make the iPad work.  The child has to ask for a color or ask for a piece to puzzle.  I just want to make sure that there is constant communication.” Kelly said she’s seen language-delayed children succeed in therapy because it is an easy user interface. She adds, the iPad is fun for them and they all know how to use it! “I have seen children build sentences with the Sentence Maker app and I have seen children read whole sentences in the Starfall app because the graphics are fun and interactive.”

The American Speech-Language-Hearing Association (ASHA) says using apps in an educational environment is an advantage for language-delayed students. Their site lists improved communication, progress monitoring, student motivation, and funding for apps as some of the advantages. ASHA mentions some disadvantages can be cost and connectivity. However, with WiFi being available on almost every corner, that shouldn’t be an issue. The cost is not much of a concern either as I have found most apps are under $10. Some can be more, but most we use fall between .99 and $4.99. There are also organizations, such as, itaalk.org, Autism Cares, and Act Today! Autism Care and Treatment, who help families and individuals receive grants for iPads.

Also an SLP, Erica Radden-Bradley works with both language-delayed and non-verbal students and uses the iPad in approximately 80 percent of her therapy. She added, “I also use mine as a tool to teach and/or build on targeted language skills and as a reward or reinforcer for a job well done.” She said that using the iPad has improved her ability to be more versatile in her therapy. Erica said there are so many apps out there that, while she still uses invaluable manipulatives and other tangible learning items, she is now able to switch gears and change the tone and direction of the session within seconds. It eliminates a lot of wait time, and, she found that younger children are more patient transitioning between activities on the iPad. They enjoy watching the pages open and close.

Erica said her less to non-verbal friends appear more motivated using the iPad in therapy. They also seem less frustrated and more willing to attempt verbal productions when they know they have something on which to fall back if they are unsuccessful in their initial communicative attempt. Kelly also saw demonstrations with non-verbal children where the iPad’s voice output component becomes the child’s voice. She adds the iPad is a perfect communication or augmentative communication tool.

As new apps for autistic children are created, there are now review sites that provide as much user information as possible, so the user knows whether or not it will be effective for their child. As a parent, I appreciate others testing apps out before I make an impulse buy because the number of apps can be overwhelming.

What does the future hold?

I believe the iPad’s future will only get better for autistic kids. Kelly said speech therapy, as well as all educational fields, are headed more and more toward technology. “Our children need to know how to use technology and we as SLPs can help them do that. Whatever happens, SLPs need to continue to make therapy interactive. Part of our job is to help the child be a better communicator and interactor with other people and the world around them,” said Kelly. I agree with Kelly that “it is light-weight, portable, easy-to use and has enough memory to hold all the phrases a child would ever want to say!”

I watched a video of a non-verbal child using the iPad to communicate. As questions were asked, he was able to answer “yes” or “no” by touching the picture on the iPad. Once he figured out he could use the device to communicate what he wanted, his face lit up! He gained a little bit of confidence and so did the parents. As a mom to an autistic, language-delayed, brilliant son, it’s the little victories that mean the most. Little steps and consistent language exercises are key to helping our autistic friends communicate. I am not sure Mr. Jobs created the iPad to revolutionize the world of communication for autistic children, but he in fact has, and we thank him for this legacy he left behind.