iPad Apps Your Kids Can Play Together! 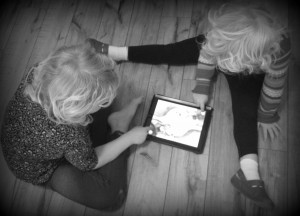 Not all of us are lucky enough to have an iPad for every person in the house.  For our family of four, we have one iPad. One. Trust me, there are days I would rather have no iPad in the house if it would mean an end to the fighting. Oh, if only there were a way to find iPad apps your kids can play together….

Well, hey, guess what, there is! It turns out there are many multi-player apps out there to subdue our quarreling brood. Here are just a few for the younger crowd:

Your kids will work together as a team with Toca Store, playing shopkeeper and customer. There is no need to be competitive or outdo each other, and because players are placed at opposite ends of the iPad, there will be (uh, should be) no fighting over who gets to sit where. This app is generally for the 4+ crowd, but with the help of my 4-year-old, my 2-year-old caught on quickly.  $2.99

Yet another winner from Toca Boca! The 2+ crowd will have a blast making preparations for a tea party, everything from choosing the tablecloth and chinaware to serving their favorite treats and beverages to their guest. Watch out, spills happen, but Mom won’t have to clean up this one!  $2.99

Your kids can even share the iPad in the car! With Road-Trip-Bingo HD, two kids can have their own bingo board either side-by-side or across from each other, thanks to this app’s two-bingo-boards mode. To make this friendly to the non-reading ages, the boards are full of things little eyes might see while being a passenger in the back seat, including signs, colored cars, and other objects. When someone sees an object on their board, they tap the image. The first to get BINGO wins.  $1.99

If you have kids, then you have at least 5 memory games in your playroom. If you’re like my family, not a single one is playable because too many cards are missing. Go ahead and toss yours out and get this app instead. Fruit Memory Match Game is a simple matching game for 2-4 year olds, and you can have up to four players, one in each corner of the iPad. Just like in the “real” game, each takes a turn revealing two cards. If they match, that player gets another turn; if not, it’s the next player’s turn.  $0.99

Remember Hungry Hungry Hippos? Well, replace the hippos with alligators and the balls with fish, and you have an entertaining app for up to four players. Each player gets a corner of the iPad and then tries to gobble up as many fish as possible within a set time. $1.99