How the iPad Helped My Kids Clean Their Room 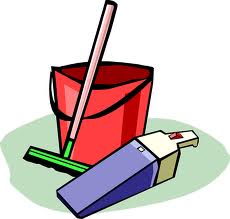 If you’re like most parents, you have high hopes for your kids. They are going to be smart, successful, and happy (and hopefully use their smarts and success to happily take care of you in your old age, am I right?!?). I’m sure I’ll have thoughts like these some day, but I’m afraid right now I want only one thing for my two girls – that they don’t grow up to be like me. I’m in my late thirties and still don’t have my umph together. I can’t cook, clean, or budget with any noteworthy skill. A place for everything and everything in its place? Uh, yah, the dust bunnies are right where I expect them to be and have been for the past several months.

I’m trying, though, really I am. Well, maybe not with the cooking or budgeting, but I am making an effort when it comes to organizing and creating some sense of cleanliness and order to the chaos that is our home. Even more important to me, however, is passing this effort along to my young girls. My hope is that getting them actively involved in the effort, the process, will somehow morph them into women who never have to waste a moment of their time lamenting over lost keys, dust bunnies, misfiled paperwork, and black stuff growing in the fridge.

First, I told them we were going to clean their room. Those cries and screams you heard the other day? Yah, those were my girls when I told them of my plans. I softened the blow by explaining that I would clean one half of the room and they would be responsible for the other half.

Children at this age are so visual. The more visual aides, the better. To that end, I used the iPad to take a picture of their side of the room. 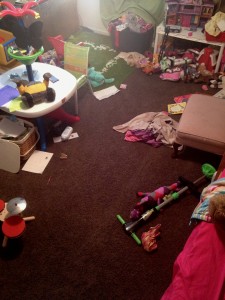 Next, I asked both girls to pick a color. My 5-year-old picked yellow, the 3-year-old blue. I used Doodle Buddy to circle in yellow everything I wanted the 5-year-old to pick up and blue everything her little sister was responsible for putting away. 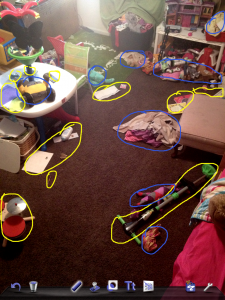 I placed the iPad in a central location (off the floor away from little feet, though!) so the girls could refer back to the picture in case they forgot what their responsibility was. To make it even more exciting, I told them that every time they finished cleaning up one of their circled items, they could check it off as done on the iPad. Seriously, that was the icing on the cake as far as they were concerned! Little kids are awesome like that. Less than 15 minutes later, this is what we had: 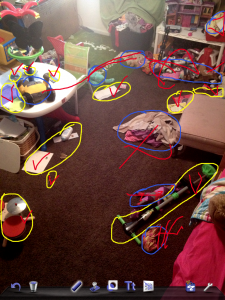 Talk about a success! This worked on so many levels. By using the iPad this way, my girls understood exactly what I expected of them. While they busied themselves with their colored circles, I was able to busy myself on the other side of their room…UNINTERRUPTED! I kid you not. Perhaps because of their age, neither of them got much pleasure or satisfaction from actually having cleaned their room. What gave them pleasure was being able to cross/check off their circles as done. In fact, that was our only negative of this experience: both girls wanting to cross off one of their circles at the same time and having to wait for their sister to finish.

Of course I would forget to take a picture of the end result. Trust me, it was clean. This mom was pleased.

Maybe a couple more months of baby steps, then I think I’ll have them tackle the garage that the hubby and I have neglected for the past year….