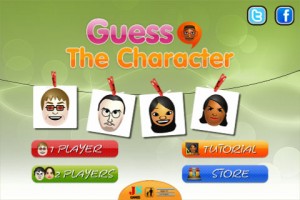 Channel your inner Sherlock Holmes using your keen detective skills to figure out your opponents character.

Kids will need to know how to read to play this game independently.

– There are a lot of in-app ads

Elementary, my dear Watson!  Guess The Character requires the process of elimination and an attention to detail to help find your opponent’s character from a sea of faces. Distinguishing characteristics such as hairstyle, vision aids, and lip shape and size are among the many features that are the subject of questions to ask when trying to use powers of deduction. 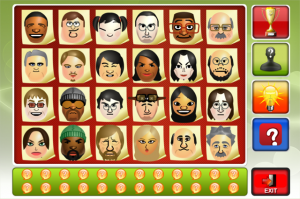 The gameplay portion of the app shows rows of cartoon faces, some of which are caricatures of famous and infamous personalities – think Michael Jackson, Chuck Norris, and Albert Einstein to name a few.  Each head has their own unique  set of features to help with the answering process.

I was assigned a character of my own which the computer had to guess, and that face popped up at the beginning of the game. I then hit the question mark graphic on the right-hand side of the screen and a list of questions appeared for me to ask of my opponent. Is the character bald?  Do they have long or short hair? Are their eyes open or closed? Based on the answers to these questions, flashing red X marks appeared on the faces that don’t fit the criteria and I tapped those faces. 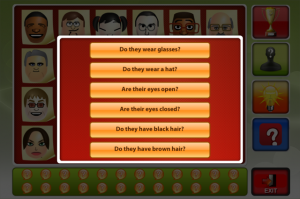 In my case my opponent was the computer but the game allows players to connect to the iPad Game Center and play other real-time opponents. I could also choose to challenge someone I knew who had the app downloaded on their device. As the questions were answered each face was eliminated and the question “bubbles” at the bottom of the screen turned from yellow to grey as my opponent eliminated choices. When I thought I had the correct character, I tapped the graphic of the shadowy figure on the right-hand side. 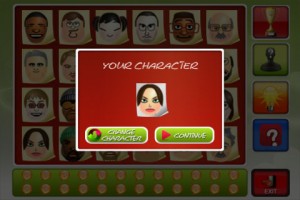 Unfortunately the game has a lot of ads for other apps, and they pop up at the completion of each round. Most of the apps are free but it tends to get really bothersome. Gameplay and graphics are simple and easy, especially for kids who can read (non-readers won’t be able to play this without help), and it’s also available in several languages, so the bottom line is that Guess The Character is a fun, free download.