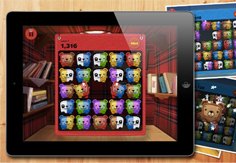 Gemibears HD is a cute puzzle game where you slide felt bears around in an attempt to match their color with their neighbor’s. The more matches at one time, the more combos and points you get. There are 5 planets, 3 unique modes, and over 60 stages, yet they all feel the same.

Children over the age of 10 are the most likely to enjoy the puzzle aspects of the game. A younger child can get by through pure luck for a while, but the real points require thoughtful moves.

– It’s pure repetition
– The music is cute, yes, but only for the first ten minutes
– The storyline doesn’t expand beyond the fact that there are creatures called Gemibears, and you can collect them
– Since it’s a puzzle game, the HD is not worth an extra dollar

Here’s the story: You zoom into a planet made of yarn and see a bunch of gemibears… bears that are half one color and half another. It’s your job to slide them around until like colors match each other, combos are formed, and points are collected. Fill the bar with the most combos you can, in the fewest number of moves, and you get 3 stars at the end of the level.

You start out in Story mode, which has very little story beyond a random tutorial provided by Koala Gemibear, and you can eventually unlock the Action, Tactic, and Classic modes. Or you can pay an extra $0.99 and unlock everything instantly. While you have the option to collect Gemibears along the way to add to your Gemipedia (You guessed it, an encyclopedia of Gemibears), there’s no real incentive to collect them.

The game is in the same sphere as Bejeweled, though it seems more like an overly-complicated digital version of connect four with very few settings to switch up the gameplay. If you enjoy sliding puzzles, you’ll enjoy this game, though I highly recommend sticking with the less expensive, non-HD version. This is a game much more suited to parents, than children.