Your child may have received a 3-in-1 Apptivity Entertainer for their birthday or maybe even last Christmas. If so,  you will be pleased to know that Fisher-Price has just released some brand new content that is compatible with their 3-in-1 Apptivity Entertainer. Released on May 11th, the brand new ‘Roly Poly Animals’ app from Fisher-Price is a fun new way for children to play with their 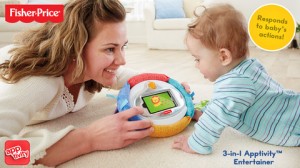 Fisher-Price promotes their apps and app compatible toys by claiming that they promote the development of fine motor skills in very young children. They also claim to foster an understanding of cause and effect as well as enhanced self-confidence as babies learn how to make the same thing happen over and over again. While this app and toy are marketed to the under-one crowd, I can see it still being fun and beneficial for children as old as three. I mean…who doesn’t love cute animals and a fun iPhone case?

If your child has the Fisher-Price 3-in-1 Apptivity Entertainer and you want to shake things up with a new app, click the Apple iTunes App Store button below to download the compatible app ‘Roly Poly Animals’ for free!