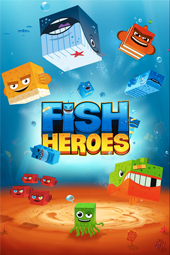 Fish Heroes is basically a 3D Angry Birds clone that takes place under the ocean. There are two things enjoyable about this game: The uproariously happy music on the main page and the faces the fish make as they alternate between taunting and cowering in fear.

Children over the age of 7 will understand the game mechanics, but it’s unlikely any kid under the age of 10 will have the patience for it. The game is ostensibly a puzzle game, though there isn’t much depth.

– FUN intro music
– Incredibly easy to learn
– The sharks taunt you, or cower in fear, depending on their mood
– A ton of stages and a variety of weapons

– It’s just a 3D Angry Birds clone
– As soon as gameplay starts, the entertaining music turns into awkward silence
– Puzzles aren’t tough enough to engage or easy enough to delight
– A lot of stages, but no storyline beyond the intro
– Little incentive to continue playing

Imagine a world where thuggish sharks like to balance on precarious structures made of wood and ice, sitting on the ocean floor. There are very angry fish in this world, and they’ve decided to exact revenge by firing themselves from a giant slingshot in an attempt to knock all the sharks to the sandy bottom of the sea. Sounds familiar, right? Wrong! This isn’t a copy of Angry Birds! Because this is in 3D! Yes, you heard me correctly. You can rotate around the structures as you shoot! Not to mention it’s under the sea.

Now that we have that cleared up, let me tell you why you should buy this game. Hmm… I guess intro music isn’t enough, huh? Yes, it’s only $0.99, but it’s really just not worth it. Anyone patient enough to continue playing this for more than 15 minutes is also old enough to really enjoy a game like Angry Birds, which both takes the logical skill and shooting dexterity that this app aspires to.

The game was designed well; it looks slick, it sounds really fun, and… it just isn’t. It doesn’t even have the guesswork of figuring out the correct trajectory when you fire, since there is a crosshair to ensure accuracy. If you don’t believe me, watch the first 1:10 of this video to experience the joy of the super fun music, and then experience the immediate slow, quiet, let-down that is the actual gameplay.