Let’s face it, parents. There are a LOT of Wubbzy apps out there. Whether they are educational or just plain fun games, Cupcake Digital and the Wubbzy character have cornered the market on pre-school marketed apps. Now, Cupcake Digital as released its latest Wubbzy incarnation called ‘Wubbzy’s ABC Learn & Play’. 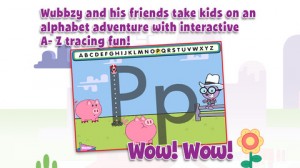 Released just last week, Wubbzy’s ABC Learn & Play is an educational app that is geared toward pre-school aged children (just like the show!). The main objective is to improve pre-school literacy skills with the help of entertaining games, touch and learn coloring pages, and dance-along music videos. Common core is the name of the game with this app, ensuring that pre-schoolers get everything they need to be successful in Kindergarten.  Features also include:

Aside from all of the fun features contained in Cupcake Digital’s new Wubbzy app, it also comes with a few extra measures to protects your kids! Cupcake Digital makes a statement in the description area of their Wubbzy app’s iTunes page stating that it only contains ‘gated links’ to ensure that adults are the only users able to access features like social media, email capabilities, and of course, the app store. On the heels of tightened app security and uproars over in-app purchasing, Cupcake Digital is playing it safe and making parents happy along the way.

If your kids love Wubbzy and you’d like to give Cupcake Digital’s Wubbzy’s ABC Learn & Play app a try, click the Apple iTunes App Store button below to download now for only $1.99.