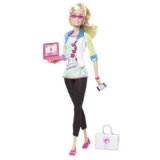 Meet Computer Software Engineer Barbie. It took 126 career changes to get to this point, having finally grown tired of being a soccer champion, magician, and dolphin trainer, to name a few of her past career choices.

I’m not going to make this too heavy. Surf the web and you will find post after post of people slamming CSE Barbie. YES, it took too long for her to get here. YES, her attire is too cute and her hair entirely too shiny and neat. YES, there is too much pink. Blah blah blah.

In the end, for me it comes down to this: Which would I rather my 3 and 5-year-old girls play with? CSE Barbie or a princess doll?

Scenario #1: Stuck in a tower

Actually, I take that “in the end” question back. It’s not which toy I would rather my young girls play with. Rather, it’s which toy will inspire and empower them to be the person they want to be. For some, that’s a princess doll. For others, it’s CSE Barbie. No matter which our daughters choose, there will always be stereotypes and biases to overcome (I’ve shamelessly exposed mine!), and all we can do is hope they are strong enough to persevere.

I know my girls have a long way to go, but I’m very ready and excited to support them on their quests to discover their future selves….so long as they don’t ask me what a software engineer does….um….