Brave: Storybook Deluxe Review – Aim Your Arrows At This App 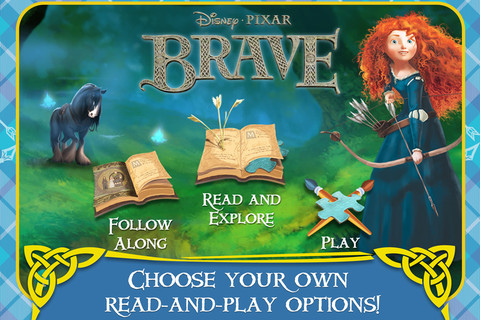 Ahhh, the rolling verdant hills of the Scottish Highlands.  Known for interesting cuisine and gender equality in fashion (read: haggis and kilts), it is also home to Disney’s latest animated princess, Merida.  As the main character in the June 2012-released animated flick “BRAVE”, the feisty redhead eschews the medieval customs of her kingdom and asserts herself as a capable and independent young girl.

Brave: Storybook Deluxe is a lovely app that helps to bring the richly-hued greens and fiery reds of the Disney movie to the small screen of the iPad, turning it into an interactive storybook that will be sure to captivate young readers.  The storyline is the same as in the movie, but condensed and interspersed with fun mini-games such as coloring pages, puzzles, and an archery game with Merida herself behind the bow and arrow. 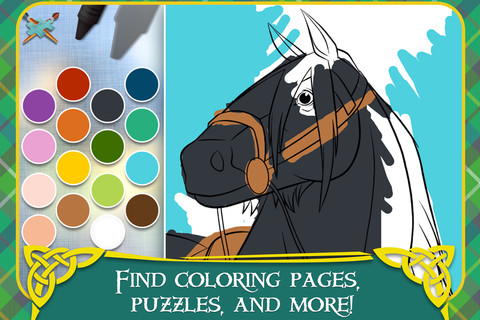 There are three separate modes within the app.  In the first, and perhaps the most confusing, players can “Follow Along”. On the left of the iPad screen are the words of the story, highlighted and narrated.  On the right is an artful illustration without interactivity depicting the scene being described.  My 5-year-old got pretty frustrated when he tried to swipe to the right to “turn” the page and realized he actually had to go to a screen depicting thumbnails of each page of the story. 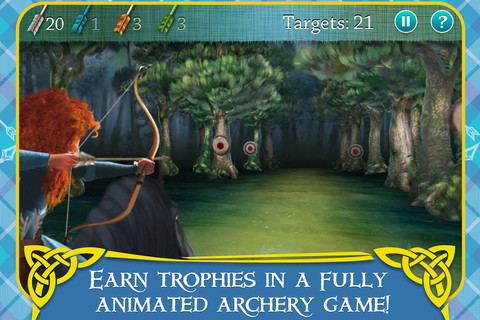 He quickly moved on to the mode titled “Read And Explore”.  This mode, too, told the story but allowed for players to swipe and watch a short animated clip.  Every few pages he was treated to a mini-game and he also made sure to keep his eyes open for hidden arrows nestled within the pictures.  The “Play” mode (his favorite) skipped the the reading and went straight to the mini-games, and the archery game which almost made it cool for him to consider playing this “girl app”.  (Apparently no one had yet informed him of the Scottish tradition of kilts.)

Disney movies and their respective franchises tend to garner cult followings, and the Brave movement is no exception.  As a companion app to the popular movie, Brave: Storybook Deluxe is the perfect app for that spirited princess in your house.  While the download price of $6.99 it’s definitely on the high end of the price spectrum for interactive storybooks, but its illustrations and extensive content make it well worth the money.

– Experience the magic of Disney/Pixar’s BRAVE as an interactive storybook app!
– Read along and discover beautiful art, stunning animation, and special effects!
– Hunt for hidden arrows and take aim in a Medieval-style archery game!

This “brave” companion app to the Disney movie is sure to delight!