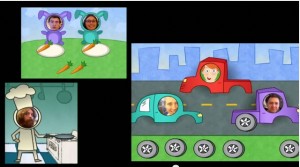 Bill Shribman is a professional photographer and a producer for WGBH Public Television. You may have heard of him or his company because of what they produce. If your children have ever watch Arthur, Martha Speaks, or Curious George, then you have witnessed Bill’s handiwork first hand.

As the producer of extraordinarily popular children shows, Shribman was asked to speak  at a TEDx Boston presentation about children, apps, and his latest creations. One of these projects consists of bringing news headlines and photographs to children. Shribman described, as someone who grew up in England, being shocked that American children do not really get exposed to the news, outside of what their parents watch. To remedy this, Shribman’s team has taken strong photographs from the weeks news and paired them with simple, twitter-length caption that ultimately culminates as a news app for children.

He also described the creation of a common-core math app for first and second grade students that puts a heavy emphasis on the use of the iPad camera. Using augmented reality, children are able to scan math markers that are placed around the room, using the iPad camera, and have the information appear on the iPad screen as a part of the interactive math app.

He also went on to describe a new Curious George app that is being developed that also uses the iPad camera as a source of interactivity. The camera serves to pick up the child’s movements and allows them to control Curious George on the screen. When children jump, so does Curious George. With the heavy emphasis placed on movement tracking, children will be up and moving instead of sedentary, while playing their favorite apps.

In closing, Shribman points out the importance of interactivity and goes on to tout the camera on the iPad as the biggest and most valuable learning tool in the app world, today. To view Shribman’s entire presentation, click here.