Beyond the Apps: I Spy With My Little Eye 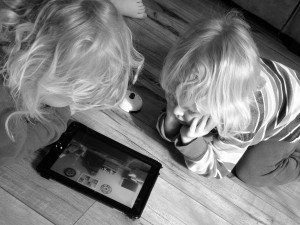 I don’t know about you, but I’m not rolling around in a pile of money. Well, that’s not entirely true. Leonardo DiCaprio and I rolled around in one the other night, but that was (unfortunately) an Inception-inspired dream only. Ahhhhhh….

Anyways, my family is not in a position to spend wads of money on apps. Yes, most are under $5, but that’s what makes them dangerous: they add up very quietly! I have been on a kick lately to come up with fun games for my 2 and 5-year olds to play on the iPad that go beyond just tapping on an icon and using an app.

Someone is the Picture Boss. It is the Picture Boss’ responsibility to elope with the iPad and take a picture of a crowded scene. Pretty much any room in our cluttered house qualifies. Once the Boss has taken the picture, everyone sits together with the iPad clearly visible. The Boss then starts the game by finding a secret object in the picture and saying “I spy with my little eye something (insert color of secret object here).” It is then everyone else’s job to find the correct object. My girls are still pretty young and could use some help when it comes to taking turns, so I decided to add a bell to the mix, making it a rule that the people searching for the objects had to ring the bell before stating their guess.

How it Went Over

Okay, so that was how the game went in my head. Here’s how it really went down:

The 5-year-old immediately jumped into the Picture Boss position, much to the displeasure of the 2-year-old. Fast-forward through 10 minutes of crying, screaming, and sisterly disownership, I finally got the two to agree to a coin toss. Big sister won. While she took off to the play room to take a picture with the iPad, the 2-year-old and I got our floor space ready and bell in position. The Picture Boss promptly returned, displayed her picture, and we all sat down to begin spying. I have to say, the game went really well and the girls enjoyed it. Yes we could have played it “live” by actually going to the play room and simply spying there, but inevitably that would have ended up with one or both of them getting distracted and walking off to play. In our home-made iPad version, their spot on the living room floor kept their attention completely focused on the picture in front of them, and I would have to say the most enjoyable part of the game for them was to be the one to run off with the iPad to take the picture. Yes, too, we could have easily used books or magazines, but my girls really enjoyed making their things the object of the game.

How I really know this game is a keeper, though? They continued to play it together without me.

Did you play this with your little ones? If so, tell us in the comments section how it went! Have any other ideas for Beyond the Apps? Feel free to share them below, as well.