Dunno if you noticed by the lack of your children’s attention spans or the rising heat, but SUMMER IS COMING.  For parents, this means crazy childcare schedules, keeping kids entertained, and pumping up the baby pool at least 3 times a week even though you TOLD them not to do CANNONBALLS in five INCHES of water.  For kids, summer means no school, no pants, and as much ice cream as a 5yo can theoretically stuff into her face.

Let’s face it: ice cream and cleanliness just do not go hand in hand.  I almost never order my own ice cream when I take the kids to get theirs; inevitably I end up licking up drips from the side of cones.  And can we not even talk about when we go into a place that lets you top your own ‘scream.  (I’m shuddering at the amount of times I saw small fingers grabbing sour gummy worms from behind the sneeze bar.)

Moppa Ice Cream got the memo.  The folks over at Moppadop must also know some ice cream  novices, because this app is intended for that particular target audience (the ones who routinely miss their mouths).  I’m loving the idea that the ice cream mess is contained inside my app and – this is the best part – you don’t have to put on pants to enjoy it!

My youngest is headed off to kindergarten in the fall, and on top of that the girl really enjoys her ice cream.  Of course her eyes lit up when I told her I had a new ice cream app; she practically snatched the iPad out of my hands and proceeded to explore with ease and without asking for help from me.  There are classic choices like strawberry ice cream, and more outrageous options like worm sprinkles. Soon she was making banana splits with dead fish (gross) and laughing about it (cute). 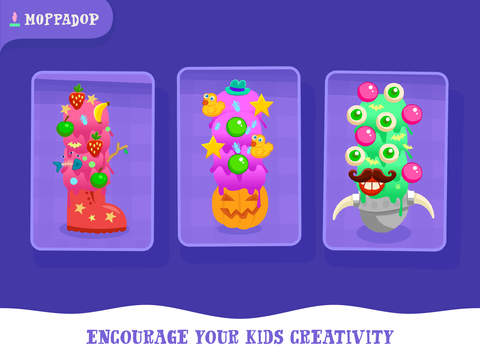 What’s great about this app is it’s totally imagination-driven.  Kiddos can customize their ice cream creations however they like, and the lack of required reading or complicated game play make Moppa Ice Cream perfect for your toddler or preschooler.  It’s $1.99 in the App Store but the app doesn’t support in-app purchases or third-party advertising, so your child will never be interrupted.  Now go take off your pants and try your hand at some dead fish banana splits!