Just this week, Ansel & Clair, winners of 15 various awards and accolades,have released the second installment in their dinosaur app trilogy. ‘Ansel & Clair: Jurassic Dinosaurs’ is a fantastic educational app that introduces children to the dinosaurs who lived in the

As with all Ansel & Clair apps, the visuals are stunning. ‘Jurassic Dinosaurs’ animations and graphics bring the ancient dinosaur world to life for children of all ages. The app also includes puzzles and games that teach many facts about the different Jurassic Dinosaurs. Children will learn: 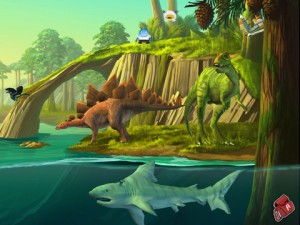 Just as with all of Ansel & Clair apps, this app sports their signature features. The touch-and-drag camera allows kids to snap photos of their favorite Jurassic dinosaurs in their natural habitat, with the simple click of a button! After taking pictures, they can be dragged and arranged in the ‘Travel Log’. There is even space for children to type their own notes about each photograph.

‘Ansel & Clair : Jurassic Dinosaurs’ is now available for download via the Apple iTunes App Store button below for only $1.99. This app is available for iPad only.