Using The iPad In Speech Therapy 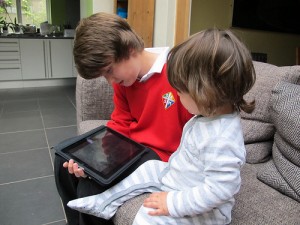 Most autistic children are in some type of therapy, whether it’s occupational, speech, music, behavioral, or physical therapy. My autistic son goes to speech therapy one hour a week and has been for about 4 years now. He loves it because of his amazing therapist and because of the iPad apps he gets to use. The iPad is an excellent tool for helping autistic children focus on specific language and communication goals during speech therapy.

How We Use Apps

Our speech therapist has guided us through the world of apps and which ones we need to use for my son’s communication goals. She’s helped me understand, more importantly, how to use the apps to achieve his goals. She pointed out how important it is to only use the apps as a supplement to the therapy while encouraging the child to talk with the person instead of the app.

What’s great about the iPad is, parents can support therapy sessions at home by using the same apps and reinforcing the same learning objectives. And we can take it anywhere we want because of its mobility! She uses apps that help him learn opposites, “Wh” questions, action verbs, speaking in full sentences, spelling and reading, and to increase his vocabulary.

Apps We Use and Love

You can find an iPad app for anything and there are so many available for kids. I only highlighted a couple we really love and how we use them. My son uses Starfall’s Snowman app to learn how to ask his “Wh” questions. After he builds his snowman, his therapist switches things up and asks him to teach. He must ask her what items she wants to use for her snowman. This encourages him to ask those “Wh” questions he’s had a challenge with. He asks “what scarf do you want,” “which hat would you like,” and “what nose do you want.”  We’ve seen pretty significant growth in my son’s language when he pairs his therapy with these type of apps. Because he is a visual learner, working with these apps encourages him to both learn actions he sees and then communicate them.

Toca Boca’s apps are also great for hands-on, every day actions. He uses the Toca House app to learn every day actions like, delivering mail, washing windows, cleaning house, eating, throwing away trash, and recycling. It helps my son both build his vocabulary, communicate the action that is happening, and how to do his chores! When he sees a mailman, he has to tell us “The mailman is delivering mail.” He’s had challenges with “ing” words and this app is full of them. It’s really helped him to visually see the action as he describes it.

After using the iPad paired with his therapy sessions, we’ve seen significant growth in my son’s speech and communication. He is now attempting (at least) to use more than 2-3 words in a sentence. He’s able to point out different objects, places, and things, proving he’s building that vocabulary, which is so important for autistic children. This year, we have also seen a huge increase in his reading. We discovered he loves to read and spell. He uses the AlligatorApps Sight Words and School Zone Interactive’s Spelling 1-2 apps to practice reading and spelling. He’s a better speller than my oldest!

The iPad apps’ activities paired with speech therapy have encouraged and helped my language-delayed son express himself, communicate better, and build his vocabulary. We use the iPad every, single day and don’t know where we’d be without it!