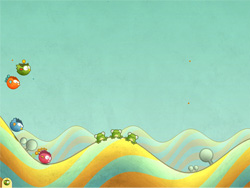 Tiny Wings HD only requires one finger to play, yet it manages to be at turns thrilling and calming… and it’s always addictive. In it, you use strategic poking to launch a bird off sloped hills and across a gorgeous landscape.

Despite its appearance, this game is difficult enough that little tykes would have a lot of trouble winning, and would likely become frustrated.

– Beautiful graphics that change every day (the setting is always shifting colors and patterns)
– A small learning curve… you play with one finger
– Calm music and sounds that fit perfectly
– A surprisingly deep level of challenge and depth of features, like two-person races on the same iPad

Cons:
– Almost too difficult, it can get frustrating
– The differences between the three stages was not entirely clear at first

Tiny Wings HD is a major upgrade of the popular Tiny Wings that came out a year ago. It has an incredibly simple concept: race to the other side of the stage as fast as possible. These birds have miniscule wings, so flight isn’t the greatest option. 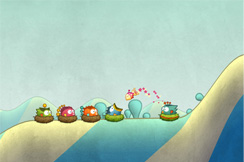 To overcome your tiny wings, you have to slide on your belly and use the slope of hills to launch yourself into the air. Three well-timed launches in a row will give you a mini boost. This is a one poke game, meaning you only have to know when to hold your finger against the screen to slide, and when to let go to flap your little wings.

It sounds incredibly easy, and in terms of learning how to play, it is. You get the gist of the game in no time, and you can have loads of fun in the first game mode, “Day Trip,” where you casually fly through various stages. 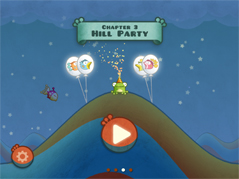 The second game mode is “Flight School,” where you race your three bird siblings to get to the mom bird. The first one to get there receives the biggest fish. Boy oh boy does it take some skill to really start winning in these levels! You legitimately have to practice if you want any hope of coming in first (2nd and 3rd are easy). There are some obstacles that slow you down, like large puddles of water, and flowers will give you a nice bounce if you hit them right, but overall victory depends solely on your sense of timing, and the slope of those hills.

The final game mode is called “Hill Party” and is the most startling upgrade to the original. In this mode the iPad is split down the middle and you face off against a human opponent on THE SAME IPAD! 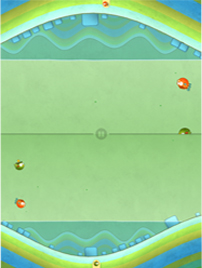 Talk about a battle! The calmness of the birds in flight and the gentle music definitely did not match my demeanor as I battled my girlfriend for ultimate victory. She did not get quite as intense about it as I did, but she definitely had fun.

You can probably tell at this point that I think it’s an excellent game, and judging by how much time I’ve spent playing it the last few days, I think you’ll agree. It’s always nice to have a game that you can pull out and play for a few minutes when you need a little fun, but don’t want anything too complicated. There’s nothing not to like about this game, even at a $2.99 price tag.

– 3 Stages:
Day Camp: Casual play on your own, practicing your moves
Flight School: Race your bird siblings to see who will come in first (15 stages)
Hill Party: Race your real life sibling for ultimate victory
– Head to head competition and computer competition
– Can complete objectives to upgrade your nest (not much incentive)
– Can synch to your other devices using iCloud

Here is a trailer for the original Tiny Wings, which has very similar game mechanics: