There are no more babies living in my house, like – ever again.  I don’t even like cooing over other people’s babies, that’s how ‘over it’ I am about the whole idea of soft, adorable, cuddly… NO WAIT, I can’t get sucked back in again!  Although, there is some really fashionable baby clothing and gadgets and… NOOOOOO!!

Okay, so maybe I don’t want the little nuggets around again but I still enjoy finding baby gear and tech that I can share with other parents of infants and toddlers.  One such gem in the rough is the BabyLit series of board books; classic literature that’s redesigned for very young kiddos to understand and enjoy in small, rigid book form. 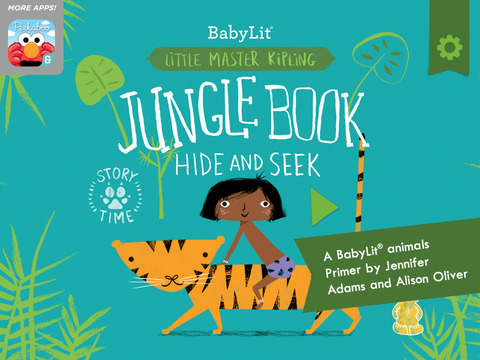 To appeal to a new emerging BabyLit audience, the company has been releasing some fan favorites in app form.  The stories are pared down and condensed in a fun-to-play app with features that make it perfect for the youngest iPad Kid in your family.

Last week Night & Day Studios released the app version of a Rudyard Kipling story that everyone knows.  Jungle Book Hide & Seek follows the story of Mowgli, a boy abandoned in the forest only to be raised like an animal, by animals.

The app features a (very. but that’s okay) condensed version of the tale, read aloud to players with fun animations in the background.  A simple swipe right or left turns the pages, and returning to the home menu is just a click on the button.

There’s also a seek-and-find mini-game that my kids (even though they’re not really babies) really enjoyed.  In fact, it’s probably the only critique I have for the game – playing seek-and-find requires players to move the iPad up and down, and left to right, which is not exactly easy for tiny toddler hands.

Beyond that, the app is really fun and engaging.  I’m a bibliophile daughter of an elementary school teacher, so re-imagined classic lit like this is totally my cup of tea.  You can find Jungle Book Hide & Seek in the App Store for $0.99, along with the other Night & Day Studios apps.