Before having children, my life-skills resume did not include experience with babies or kids. When it came time to have a family of my own, I relied heavily on books and the few friends I had with kids of their own. It didn’t take long to find out that the books were garbage and my friends were the real experts. They told it like it was, and they told it with humor and camaraderie. They filled in my knowledge gaps when it came to all things pregnancy and babies.

Back in the pre-kids times, I held the belief that 0-2 were the hardest years. I mean, all I ever heard about were the Terrible Twos. Seemed to me (at the time) that once you got through those first couple years, it would be smooth sailing from then on out; well, until you got to the teenage-years, of course. For some reason, even despite all the experienced-based expert advice coming from my friends, I still have it in my head that now, with a 3 and 5-year-old, I should be done with colossal, end-of-the-world magnitude tantrums.

You probably think I’m talking about the 3-year-old. Nope. It’s the 5-year-old. In a good week, she has about 3 ginormous meltdowns, the kind that take her a good hour to calm down from (and take me twice as long to recover from). Between these meltdowns and the seemingly constant bickering between her and her younger sister (and the subsequent reprimanding by me), I often end the day feeling as though I haven’t had any or enough positive interactions with my oldest daughter.

It was at the end of a particularly volatile day, after putting my 5-year-old to bed and watching her fall asleep, looking so peaceful and so young, that I decided to pick up the family iPad and make a video for her.

As parents, it’s easy for us to get caught up in correcting, disciplining, or reprimanding our kids, especially toddlers. They make so many mistakes, and it’s our job to teach them the right way. However, I think many of us forget to praise them on all the things they do right or excel at. I’m guilty of this way too much.

So, back to the iPad…I made a short iPad video of me talking to the camera as though I was talking to my oldest daughter. I told her I think she’s a fantastic artist, that her rainbow paintings are my favorite. I told her I enjoy making up stories with her, that her endings always surprise me. I thanked her for helping me with the little things, like mopping and flushing the potty when other people (ahem, 3-year-old) forget to. I told her I love that she enjoys yoga and jogging and how I can’t wait to take her to my exercise classes when she gets older. I told her I think she’s a wonderful person, sure to make many friends when she starts school in a couple months. I told her that we all have bad days, days when we fight or get in trouble, but that I always love her, no matter how upset I may seem. I blew her a kiss and sealed it with a funny face. 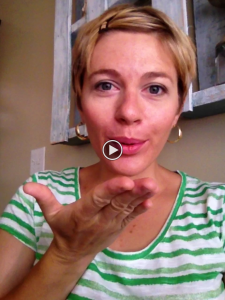 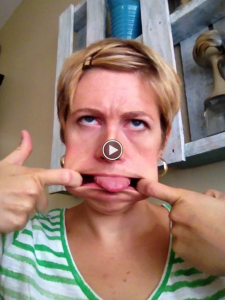 She hasn’t seen the video yet. I plan to have her watch it the next time she’s in time-out…so it probably won’t be long until she does! Until then, though, join me in a summer’s resolution to praise our children just a little bit more each and every day. You can do it the old-fashioned way, face to face, or you can get creative, using your iPad or other visual aide. They really do mean well, these little monsters of ours, and they are eager to listen and believe everything we tell them…a trait, my experts tell me, that disappears when they are teenagers!