Beyond the Apps: Find the Banana! 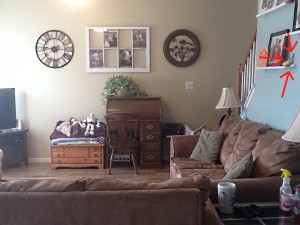 It was a Sunday morning. Actually, I have no idea if it was morning or early afternoon or what. It was the morning after the spring-forward time change. Ugh. Enough said.

My 2 and 5-year-olds were becoming tired of each other’s company. If you’re a parent, you know the signs. Well, shoot, even if you’re not a parent, it’s pretty hard to misinterpret the 500% increase in tattle-telling, toy stealing, and attempts at bodily harm. The hubby conveniently chose this time to state his intent of getting in a “quick” shower. I knew I had at least 30 minutes alone with my girls, and I had yet to finish my morning caffeine fix. I needed something to keep them busy, and I wanted to do it without resorting to the television. It was in these 10 panicked seconds that I came up with Find the Banana!

Designate someone as the Hider and the rest as the Seekers. The Hider picks a room in the house. The Seekers sequester themselves away from the Hider’s room. The Hider then places a banana somewhere in that room, making sure to keep most of it visible. Then, the Hider takes a picture of the room with the iPad, retrieves the banana, and then frees the Seekers from their waiting spot. The Seekers then sit down with the iPad and a bell, try to find the banana in the picture, and then ring the bell when they see it. It is then that person’s turn to be the Hider and take off with the banana and iPad.

How it Went Down

I declared myself the first Hider. First of all, I wanted to avoid any “I want to go first!!!” fights. Second, I knew my 2-year-old needed to go potty, so I banished them both to the downstairs bathroom while I hid the banana in the living room. That there is some mom multitasking. I took a picture of the room, removed the banana, and set the iPad and a bell on the floor. I find the bell works really well with my young ones when it comes to raising awareness of turn-taking. Once freed from the bathroom (and after hearing a most descriptive story about “the biggest poop EVER!”), my girls sat down excitedly and set about to finding the banana. It didn’t take them long, as I had deliberately made the first hiding spot easy to find, but they had a blast. We all took turns being Hider and Seeker, and even my 2-year-old could do both tasks on her own (so long as we looked past the blurriness of her pictures). It wasn’t long, however, before the banana started to show signs of being manhandled, so the game changed to the Hider picking the object and hiding that instead.

Of course this game could be played without taking pictures with the iPad. Just simply hide an object and find it. However, I don’t know about your kids, but my kids are easily distracted. If I were to play this without having them sit down to study a picture, my 2-year-old would be off chasing something shiny within the first 2 minutes. I find that incorporating the iPad adds the perfect amount of sit-still-and-concentrate time along with get-up-and-move time.

In the end, my 2-year-old was quite happy to be a full-time Seeker while her older sister reveled in her role as Hider. This kept them busy long enough for me to ingest my caffeine in semi-peace.

Win-win, as far as I’m concerned.

If you decide to try this with your kids, we’d love to hear in the comments section how it went down!